Based in Sydney Australia, Yanomamo are a “sludge n roll/rock n doom” machine, with a punishing and corker of a live show.

With the recent release of a split EP – BAYOU VS YANOMAMO , and an album currently underway, Jason takes some time to geek out on guitar gear and music with us.

How was the decision made to release a split…and how did the relationship with the western states based Bayou start?

It was Brendan & Tony’s idea I think and it was timed perfectly for our WA tour with Black Cobra & Jucifer.

We first met Bayou when they came to Sydney in; I think it was 2013, to play some shows. I think Tony may have even promoted the shows under the Von Grimm label.

Those Bayou lads are a very grubby bunch & as such, we got along immediately. While our music is slightly different, I think we come from the same point of view – filthy tones & crushing riffs at devastating volume.

We played some shows with them in Melbourne when they toured with Animistic & from there we went to Perth & played Armageddooom 2 as a part of our national tour with Conan (UK).

How and why did you first pick up the guitar?

I was introduced to really great music from a really young age … it’s something I’m eternally grateful for. My father & my uncles introduced me to bands like Thin Lizzy, KISS & AC/DC when I was 4 or 5 years old. I remember being mesmerised by the amazing gatefold album sleeves & the insane music coming from the speakers.

Ace Frehley is the main reason I play guitar & one of the reasons I play Gibson Les Pauls. I was a huge KISS fanatic. I still am actually, but in my opinion KISS ended when Ace was kicked out circa 1980.

I didn’t get my first guitar until I was about 17 & I set about teaching myself how to play it. Band-wise I didn’t do all that much & I stopped playing altogether in my mid 20s as I was focused on playing basketball & work. I got interested in playing again in my mid-30s & have been a total guitar geek ever since. 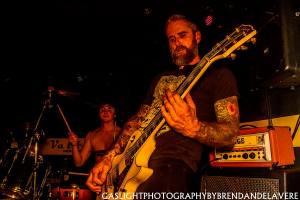 Never Mind The Bollocks, Here’s the Sex Pistols when I was 12. Still one of my favourite albums to this day. Also, I’m a huge fan of Steve Jones.

What kind of attributes do you look for when choosing an electric guitar?

All my guitars are loaded with Lace pickups – I use the Winos, the Lifers & the Drop & Gains.

We tune to B Standard & I find that the Gibson’s really handle the heavy gauge strings really well. I use a custom set of 14-70 gauge strings. Steven Burnett at Honey Tea & Maplewood guitars in Sydney (http://www.honeyteaandmaplewood.com/) does an amazing job of setting up all my guitars including installing mother of pearl nuts that help to provide a bit more bite with the low tuning.

Can you describe your approach to songwriting — how do you decide which riffs good and which are bad?

Everything starts with the riff. I usually sit down & start playing with ideas & see where they go. I record everything into Garageband & then revisit it, usually the next day. I tend to know when I re-listen to it whether or not it’s going to work. Pretty simple process.

From there, I prefer to jam the riffs out with the band as I find some of the best ideas come from those jams.

I’m usually not someone who will write an entire song in 15 minutes … I like to sit on my ideas & let them develop as I play with them over time. I have some ideas I’ve been messing with for a couple of years … they’ll be unleased one day. No rush. 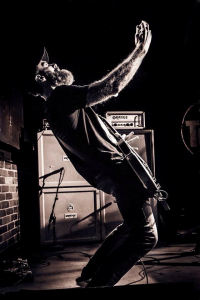 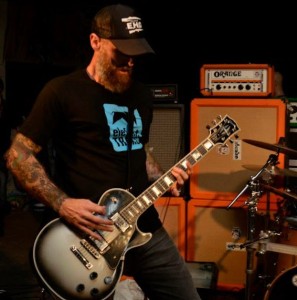 Can you tell us a bit about the recording process for the split EP…and guitar tone-wise, what was your setup like?

The 2 Yanomamo songs were recorded over a year ago in separate sessions with Frank Attard (Mother Mars) at his Frank St Studio in Sydney. They were mixed & mastered by Dav Byrne at Iridium Audio in Melbourne.

Our studio sessions are pretty quick. We record the drums & bass together, then I do a couple of guitar tracks & whatever overdubs are needed, then Tony will do his vocals last. We don’t spend too much time fussing over things as it’s just not our way of doing things … we like to capture the moment & move on.

When we recorded them my setup was my Silverburst Les Paul Custom with Lace Wino pickups into my Orange OTR120 head running 2 Orange 4×12 cabinets.

How do you recreate this live?

I’m a pretty basic guy … I don’t like things with too many knobs. My live set-up is exactly the same as the studio, although sometimes I’ll run my Sunn Beta Lead head instead of my Orange OTR120. If I do this, I’ll usually use my BlackArts Destroyer instead of the Rat/Pharaoh combination.

You recently released BAYOU vs YANOMAMO at ARMAGEDDOOM 3 at The Rosemount Hotel.  Now that the EP has been released whats next?

We recently played Slaughterfest in Sydney on August 15 & that will be our last show for a while.  We are bunkering down to write & record a full-length album that we’ll release on vinyl only.

We’ve just recruited a new drummer & we’re pretty excited about working on new material with him.

Give us your best “wtf” live show experience…

Slaughterfest 2013 … It was absolutely packed & one of the punters took particular offence to Tony & started swinging punches at him during Knights of Malta. I’m not sure what his problem was, as Tony is a very lovely chap as everyone knows.

Like a true pro, Tony didn’t miss a beat. The lads from Clagg did a particularly good job of ensuring the guy was promptly escorted from the venue. There is great footage of it on our youtube channel (link below).

Thanks for taking the time to give us your insights

you can check out Yanomamo at:

a Customised Muff and Rat 2in1 with switcheroo toggle. the handwriting was by Jason’s 5yr old son.